For a Saturday night of the best in observational comedy, you can catch Ed Byrne at the Cambridge Corn Exchange on 7 March. Ed has appeared on various BBC comedy programmes, including Mock the Week, Have I Got News For You, The Pilgrimage, Top Gear, QI and as a host on Live at the Apollo. On the back of his smash-hit tour Spoiler Alert!, this new show sees the Irish comedian analyse and assassinate his own character, questioning whether he has any traits that are worth passing on to his children. cambridgelive.org.uk

Milton Jones will perform his new show Milton: Impossible at the Corn Exchange on 13 March. Having appeared on Mock the Week, Michael McIntyre’s Comedy Roadshow and Live at the Apollo, he has been a prominent English comedian for over two decades. With a sense of humour described as ‘one-liners involving puns delivered in a deadpan and slightly neurotic style’, join Milton as he reveals the truth about his life as an international spy in an evening of exquisitely daft nonsense. Tickets are £30.50. cambridgelive.org.uk

As star of All Killa No Filla podcast, Kiri Pritchard-McLean puts serial killers under the spotlight with her co-host Rachel Fairburn, while her solo stand-up shows have seen her tackle topics including emotional abuse, structural racism and sexism. She’s got a serious knack for managing to find comedy in the bleakest of situations, which explains her latest endeavour, which sees her seeking out members of society that are universally reviled to test the limits of her empathy. The Independent gave it five stars and The Guardian describes her as “an impressive comic, making powerhouse stand-up from the thorniest of subjects”. You can catch it at Cambridge Junction on 13 March, tickets £15. junction.co.uk

As part of their new nationwide UK DJ tour, Rudimental will be performing at Cambridge Junction. With a string of UK top-ten and number-one singles, the Hackney-founded quartet – comprising Amir Amor, Piers Agget, Kesi Dryden and DJ Locksmith – have been garnering chart success and critical acclaim since 2012. Storming the charts with hits including Feel the Love, Waiting All Night, Right Here and Free, the group picked up a Mercury Prize nomination in 2013. This tour sees Rudimental going back to basics and exploring their roots in dance and club culture, with an obvious drum and bass influence. You can catch it on 14 March at 10pm, with tickets available from Cambridge Junction’s website. junction.co.uk 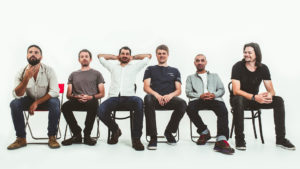 After kicking off the year with a string of shows, The Cat Empire are heading to Europe to embark on a tour of the UK and Spain. This March, you can catch the sextet’s feel-good pop at the Cambridge Corn Exchange. Hailing from Melbourne, The Cat Empire’s high-energy, smile-inducing musicianship proves time and time again that they are a world-class act. Now seven albums into their career, the band are showing no signs of slowing down, dedicating much of their time to touring internationally. You can see The Cat Empire on 15 March at 7.30pm. Tickets are £33. cambridgelive.org.uk

Indie pop/folk band Peggy Sue are performing at The Portland Arms on 24 March. Having gigged and toured with a multitude of well-known indie artists, including Mumford & Sons, First Aid Kit and Kate Nash, the Brighton-born band has accrued its very own fan base, with this show being a much-anticipated rescheduling of a previous date. Their latest album Vices was released last month, with the first few singles proving to be their most popular yet. Tickets for the show are £9.90 and can be found on The Portland Arms’ website. theportlandarms.co.uk

Also at Cambridge Junction this month are American band Hayseed Dixie, who are offering up a taste of their 15th studio album. Formed in 2000 in Nashville, Tennessee, their first album was entitled A Hillbilly Tribute to AC/DC, with their name being a linguistic play on the band. Along with reinterpretations of R&B and soul classics, the show promises original songs that challenge the status quo and perpetuates the band’s preference for their self-created genre ‘rockgrass’. Dance with them as they ask questions like: “Why does every song always sound better with a banjo in the mix?” Whether you love them, hate them, or have never heard of them (there isn’t really a middle ground), Hayseed Dixie continue to deliver music with a satirical, absurdist nature that’s bound to capture your attention. Catch them at 7pm on 28 March at Cambridge Junction. Tickets are £21. junction.co.uk

Formed in their hometown of York three years ago, The Magpies are a quartet characterised by their powerful vocals and elaborate instrumental arrangements. Comprised of vocalists Bella Gaffney and Polly Bolton, cellist Sarah Smout and fiddle ace Holly Brandon, the group draw on transatlantic influences to deliver their distinctive brand of folk, which blends Celtic and bluegrass styles. They have appeared at many festivals, including Glastonbury, Larmer Tree and Warwick, as well as performing at the Folk Alliance International in Montreal. This will be The Magpies’ second performance in Cambridge, following their appearance at the Cambridge Folk Festival in 2018. Catch them at The Portland Arms on 29 March at 7.30pm – tickets available via The Portland Arms’ website. theportlandarms.co.uk

A wild night on the river 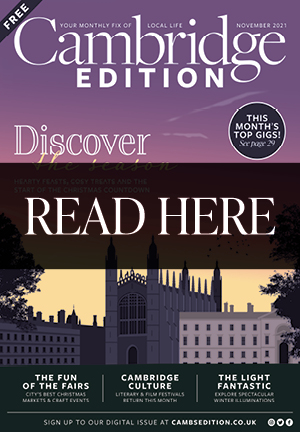 Reply Retweet Favourite
Autumn is in the air & our October issue is out now!🍁 Featuring... 🎟 The gigs not to miss 📚 The best new reads 🛋 T… https://t.co/1v15fMhGay

Reply Retweet Favourite
Following a full revamp, The Prince Regent is officially reopening, and will be kicking things off with a massive p… https://t.co/9S7fAsQstU

Reply Retweet Favourite
Find your new home at Inholm #Northstowe by @housebyus and when it comes to selling your current property – your ag… https://t.co/ljqg0qt6bf

Reply Retweet Favourite
Autumn is in the air & our October issue is out now!🍁 Featuring... 🎟 The gigs not to miss 📚 The best new reads 🛋 T… https://t.co/1v15fMhGay

Reply Retweet Favourite
Following a full revamp, The Prince Regent is officially reopening, and will be kicking things off with a massive p… https://t.co/9S7fAsQstU

Reply Retweet Favourite
Find your new home at Inholm #Northstowe by @housebyus and when it comes to selling your current property – your ag… https://t.co/ljqg0qt6bf