When our grandchildren look back on 2013, what will spring to mind? Probably similar things to those we associate with our own grandparents’ era: print dresses, bunting and a seemingly insatiable passion for knitting, cake making and crafts. The start of the ‘teenies’ (is that what we’re calling our decade?) has striking echoes of the past, thanks in some way to the patriotism inspired by the London Olympics and the Jubilee, and the recession forcing us to re-adopt the ‘make do and mend’ mentality of wartime England.

Nowhere is this more apparent than in the explosion of new WI groups, attracting new, much younger members keen to embrace retro skills. Here, the Cambridge City WI – a trendy, modern group set up in October 2012 – became so oversubscribed that a second was founded in May this year. It’s now also full.

Joanne Croxford is president of the new Cambridge Blue Belles WI, and says that they’re all about drawing on the past to inspire a new generation of women.

“The WI has a great history of empowering and educating young women,” says Joanne, 30 (pictured right), who works at the Papworth Trust. “We want to revolutionise society’s view of the WI. You say WI and people think jam, Jerusalem and pearls, but we’re really all about inspiring women of all ages [they range from 20 to 75 at the Blue Belles] and getting them more involved in the local community.”

The Women’s Institute, a Canadian idea which came to the UK in 1915, didn’t always have a stuffy image. The first groups were about helping women take on the jobs entrusted to them by the men who had gone to war, including teaching them how to work the land. In other words, making sure the country didn’t starve.

“I firmly believe that the WI is the backbone of this country,” Joanne says. “During the Second World War, for instance, they took evacuees into their homes, they advised the Women’s Royal Voluntary Service (WRVS – now RVS), who were very important during the war… So we’re very passionate about taking the baton from our foremothers and moving it forward to a younger generation.” 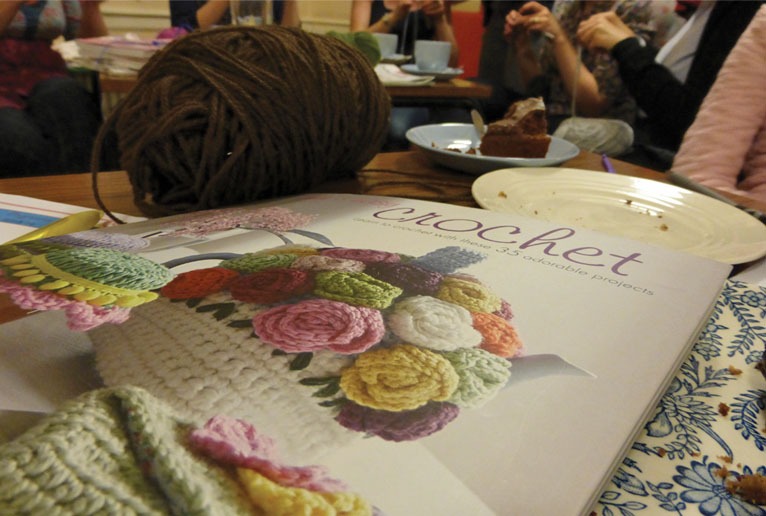 So why the sudden surge of interest in all things WI?

“Shows like the Great British Bake Off and Great British Sewing Bee have definitely helped,” Joanne explains, “then the Olympics, which brought a massive resurgence in national pride and traditional English values. I also think people have started realising there are these things going on in their communities. That’s something else we want to do: encourage people to discover what’s going on in their local area, like shopping at independent boutiques and supporting their community.”

Joanne has lots of activities planned for her Belles, including talks by local entrepreneurs and other inspiring women, craft sessions and a vintage hair and make-up party at Christmas. I joined them for their June meeting, in which we drank tea, ate amazing cakes, listened to an incredible talk about how WIs being set up in prisons are having a transformational effect on the women involved, and tried to get to grips with the art of crochet. There were also murmerings of starting an auxiliary book club and planning a Great British-themed picnic.

A talk on prisons from Ruth Bond, chair of the National Federation of Women’s Institutes, also reminded us of the power the WI has to make wider changes in the world. I had no idea that the WI were the driving force behind introducing public telephone boxes and, more recently, breast screening.

“We’re not as courageous now as we were then,” says Ruth, “but whatever you want you can do – we just need the courage to do it.”

Joanne adds: “The WI has a real history of women fighting together – not by picking up weapons but through words, actions and intelligence. Empower yourself: get involved, be inspired – the door is always open. And, more than anything, come for a laugh. We do laugh a lot.”

:: If you are interested in getting involved or starting a new group, contact Sally Kingman at the Cambridge Federation: 01223 234872 or office@cfwi.co.uk

Events at the Distillery